As champions for older people’s legal rights, Solicitors for the Elderly (SFE) wanted to make the UK aware that, although many of us are living longer, healthier lives, more of us are facing conditions like dementia that may one day limit our own decision-making abilities. Most importantly, many of us are facing these conditions without the necessary plans in place, meaning highly personal decisions are often left in the hands of strangers.

We’ve been working with SFE to raise awareness of this important issue, taking on the challenge of encouraging people to start the conversations that no one wants to have.

To launch SFE’s campaign, we developed a strategy that highlighted the urgency and significance of the issue by coining a new looming ‘incapacity crisis’. A lasting power of attorney (LPA) was positioned as the best way of preventing this crisis and ensuring people maintain a level of control.

For the campaign launch, we developed several media elements. We created a whitepaper report in which new research highlighted the worrying fate for people in the UK if no other provisions are made in the event that we lose mental capacity.

We spoke to leading charities and organisations and gained support for the report from the Alzheimer’s Society, Dying Matters, and Age UK. We also approached MP Baroness Finlay of Llandaff, who wrote a detailed preface for the campaign report in support of its vital messaging.

Alongside the campaign report and to get media and the public engaged with the issue, we developed an infographic video to highlight the eye-opening statistics drawn out from our research and to take centre stage on the new and existing SFE social media channels.

We secured a wide-ranging variety of coverage over a period of several weeks following the campaign launch. Highlights included a leading story in The Times, and coverage in The Daily Express, FT Adviser, and The Law Society Gazette. SFE representatives also spoke with BBC Radio 4: You & Yours and BBC Radio Somerset. In total we secured 45 pieces of coverage around the ‘incapacity crisis’ campaign.

We also launched SFE’s new Facebook page and, during the campaign, its following increased by 75%. We increased SFE’s Twitter following by nearly 10% over 20 days, and our profile visits were up by 99.5%. The infographic campaign video received over 25k views overall, with 23k views on Facebook alone. 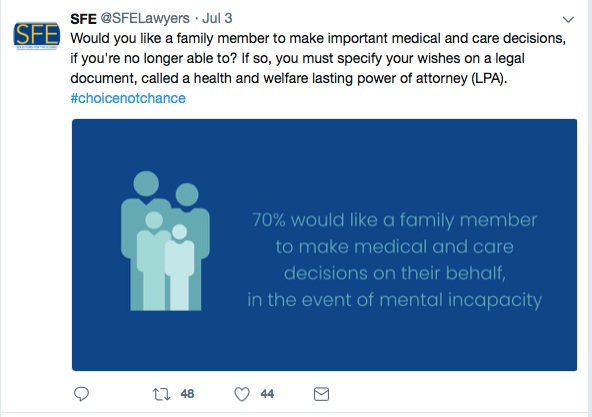